If you’re wondering where your next (or first) client is coming from, then fear not. We have 10 proven ways to get a client.

We say ‘proven’ because they actually ARE. We hopped into our ATOMIC Members group recently, and asked them to share with us all how they got their first client.

▶ Pricing Quiz | Are You Charging Enough?

▶ Sales Techniques to Get More Business this Week

If you’re wondering how to get your next client, then fear not. We have 10 proven ways to get a client coming right up!

We say ‘proven’ because they actually ARE. We hopped into our ATOMIC Members group recently, and asked them to share with us all how they got their first client.

Here’s what Roz Kara had to say:

“I got my first client locally, she was a florist. I popped in to see her weekly for about six weeks until we could verbally agree what she needed. Then, I took her for a coffee next door and we signed up a 12 week campaign. It took persistence, consistence and I used her closest competitor as an example of why she needed social media.”

Amazing! Six weeks was absolute dedication. Just singling out who she actually wanted to work with and just trying her best to get that client.

But, it does always take six weeks? Well, check out this post from Azriel Ratz, he said:

“A friend owned a sushi store. I showed up one day and said, “You should run Facebook to get people to come to the store.” He said, “Sure.””Sometimes it’s that simple and you just need to be a little bit cheeky with the ask.”

“First clients came from networking. Then I did classes locally and got business from that. Still to this day I get a referral from classes I taught eight years ago. Today, I get most of my clients from my YouTube and Facebook group, just bringing the value.

Sometimes people run classes and workshops and they think they’re going to be a good money maker. In our experience the best way to use workshops is to actually go and on-board other one-to-one clients for other services that you can charge more for. And that’s exactly what Kelly did. So, good job Kelly 👏

The third way to get your next client comes from Della Hudson, she says:

“I hand-delivered a letter to all the businesses on my local high street and nearby trading estates.”

Nice. It’s just a really, really simple but effective way of doing it when you’re just starting out.

4. The chase and hug technique

Next up we have Jen Morrison:

“When I started ‘Impressive Memories’ in 2005, a new ceramic cafe opened locally offering baby’s casting, which were not very good, let’s just say. As I was sitting there in the cafe a new mum was asking the manager about casting her newborn son. When she left, I chased her out the door.

“My intro was… “don’t pay for his casts, mine are better! Has the manager followed me? Pretend we know each other!” and I hugged a total stranger in the street (and I am not a hugger). The manager followed me outside, he was furious! He knew I did castings. The ‘new mum’ totally went along with my story. We kept pretending we were long lost school friends. I slipped my newly printed ‘Vistaprint’ business cards under the baby’s pillow and returned to the cafe. I arranged to cast her son. Then we planned an impressive party and about 12 friends all brought their babies. Those 12 then told their friends, who told their friends and so it began. I’m still friends with Suzanne and her ‘Impressive Baby’ is now a great big, six foot tall 14-year old. I totally recommend chasing people, chasing potential clients in the street and hugging them.”

We don’t think that ever goes out of fashion.

Here’s Helen Nurse on how to get your next client:

“Networking was the key for me at the start of my business. I would go as much as possible, breakfast, lunch and evening, even to the opening of an envelope. I prioritised helping others, introducing people and giving. I listened carefully to spot aha moments and then followed up on opportunities religiously.”

Absolutely love that, I think networking can work really well, but you do need to follow up and follow up religiously!

We did a tonne of networking in the beginning too and the follow up is where the actual money comes from, not eating the bacon sandwiches.

But networking doesn’t always have to be offline…

Fiona Mason‘s advice on how to get your next client:

“My very first client was from a Facebook group. I added a lot of value in the group already. But when requests for a website developer or designer came up, I didn’t just share my website or page, like most others. I would engage them in conversation in the comments and find out how I could actually help them.”

Laura did the same thing:

“I networked but all online, networking events scare me. I also approached potential clients direct after building a bit of an online relationship.”

So, online networking could be a great way to get your next client. But, the key is building those relationships and it’s all in the follow up like Helen said before. Make sure you follow up religiously.

7. Get in touch with old contacts

“I got in touch with old contacts I’d met along my career path and told them what I was up to, it worked a treat.”

That’s a really simple but effective technique. If you already have a network from a past life, then use that network. Tell people what you’re up to now it can kickstart the next business.

Check out these two, the first one’s from Fiona Mason, who says, “My very first client was from a Facebook group. I added a lot of value in the group already. But when requests for a website developer or designer came up, I didn’t just share my website or page, like most others. I would engage them in conversation in the comments and find out how I could actually help them.” And Laura did the same thing, check this out, ” I networked but all online, networking events scare me.” Yeah exactly, us too. “And approached potential clients direct after building a bit of an online relationship.” So, networking could be a great way to get your next client and it doesn’t have to be offline in-person, it can be online, remember. But, the key is building those relationships and it’s all in the follow up like Helen said before. Make sure you follow up religiously.

8. Using workshops and classes as a leaching tool

Next up is Sacha, and she says:

“I got my first client off the back of my course in April this year which is how the agency developed. They wanted me to take over the creation and design for them rather than learning how to do it for themselves. I put myself out there as an ‘expert’ in my field and was invited to speak in groups and over a period of time I got more and more referrals.”

This is great and it almost goes back to what Kelly was saying with the workshops and classes. Using that course as a leaching tool, to actually get those one-to-one clients.

A novel way to get your next client… Laura says:

“So, my first business was a portraiture studio, bricks and mortar. I stood on the streets near the studio giving out free pears to passing kids. On the pears there was a ticket to money off a shoot. I got my giant family to bring their kids in and used them as models for all my samples on my walls. Then, I ran a big online sale, gave shoots away to all the local schools to use in their fundraising. I was crazy busy but made no money.

Okay, the no money thing aside, I think this is the definition of just going all out to make your business work and I absolutely love that about Laura. Laura will put in the work and her business is absolutely flying now. So, I think those pears Laura, were a good idea 🍐

Next up, we have this incredible one by Anthony Burns who says:

“I sent out emails, typed from my inbox, not bulk email and then followed them up with phone calls. It wasn’t a nice experience and I’m not from a sales background and was quite intimidated by trying to sell it over the phone and my conversion rate was really low. But, I hammered away at it, it was that or find a job. And slowly, but surely I started to get my first customers. I built up a decent list of warm leads, but it took six months to convert the first one to a paying customer. Don’t get disheartened, it will come in the end.”

We love this. This is absolute dedication… six months of sales calls, that’s tough.

It perfectly epitomises the sheer effort and dedication that starting a business and running a business needs. Sometimes I think that we’re just sold this dream that you know you can just run some Facebook ads or do email marketing or grow your audience really quickly with a viral video on social media and everything will work out and that you should feel absolutely terrible, like scum of the earth if you are not a millionaire, after the first year in business.

I really hope that you found these stories just as inspiring as we did when we read them. Now, go out and get your next client! 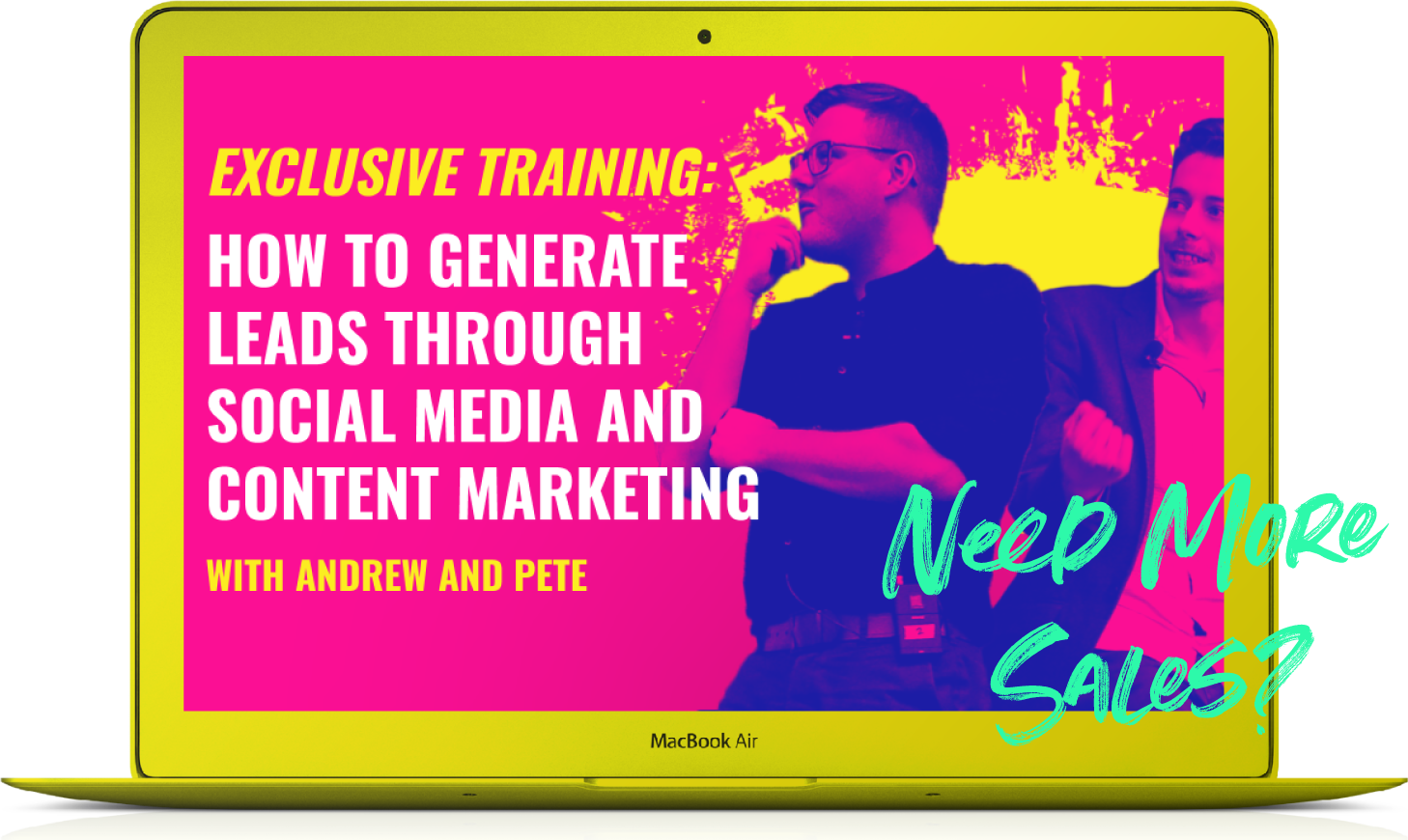